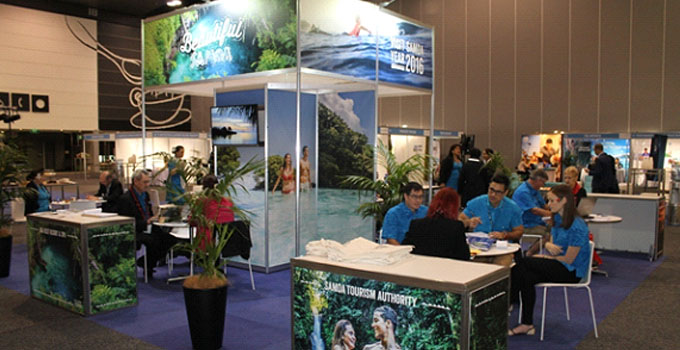 The freezing start to winter in multicultural Melbourne, Australia did not stop the Tourism Team from Samoa from promoting the destination and holiday offers/packages at the second annual South Pacific Tourism Exchange (SPTE) 2015 together with 15 other member countries of the South Pacific Tourism Organisation (SPTO).

Following the successful inaugural SPTE in Auckland last year, more than 59 international tourism buyers, wholesalers and travel trade members from main key and emerging tourism Nations, that specialise in selling South Pacific Island tourism products, have now met in Melbourne and finalised deals with up to 80 sellers from across the South Pacific.

Australia is one of the most important source markets for not only the Pacific Region, but for Samoa. And the Chairman of the STA Board of Directors, Afoa Amituana’i Faleulu Mauli couldn’t agree more.

“I am very pleased that Samoa is participating in this well thought out and great event by SPTO in a well developed country like Australia, which is a major source market for Samoa.

“It’s been positive to see a great turn-out and a lot of interests shown by buyers from Australia and across the world about what Samoa has to offer as a sustainable tourism destination.” Said Afoa.

Samoa has been able to sell its tourism products through SPTE 2015 which offered its sellers opportunities such as:

The buyers in return were offered opportunities of:

Samoa will commence its ‘Beautiful Samoa Roadshow’ from Melbourne on Tuesday the 23rd of June, and in Brisbane on Wednesday the 24th and finally in Sydney on Thursday the 25th of June before more than 30 companies of the tourism private sector return home.