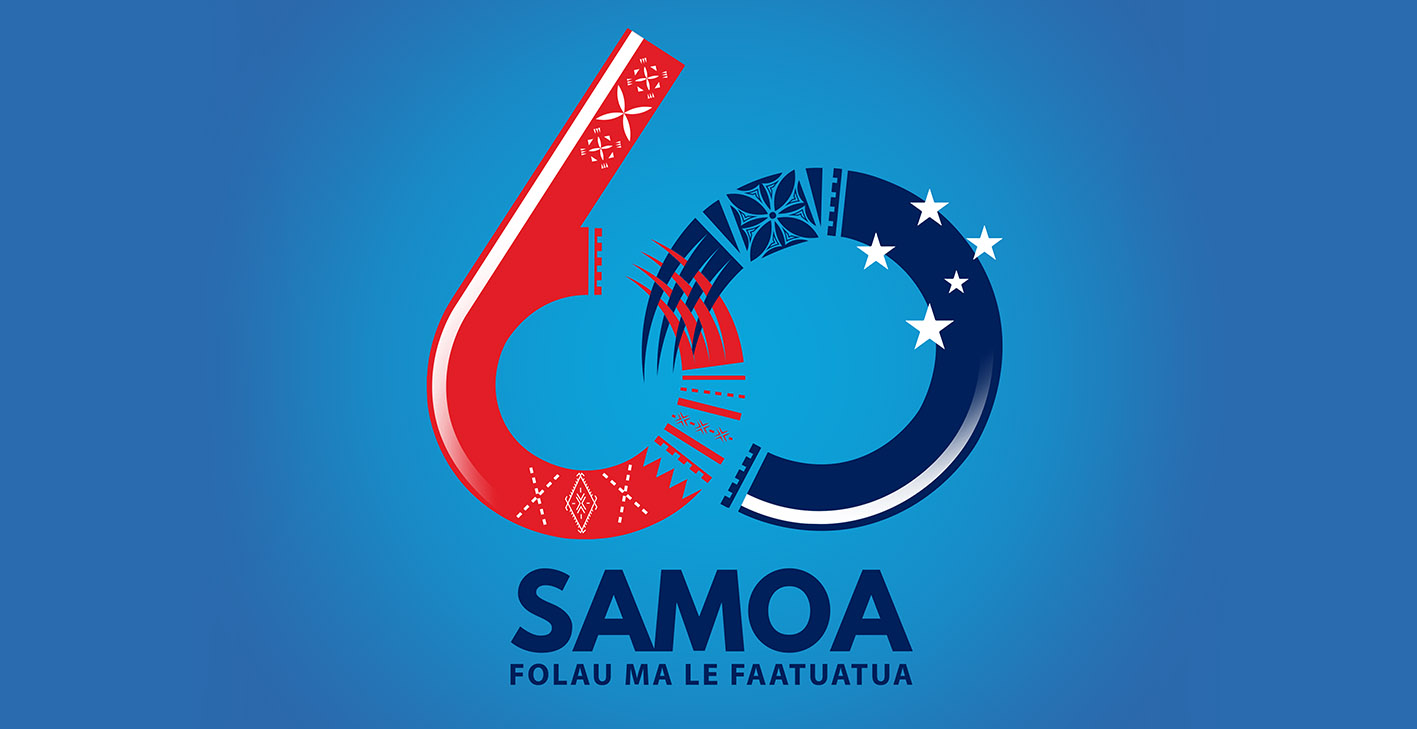 Samoa’s 60th Independence Anniversary logo was revealed in a ceremony on Wednesday 11 March in Apia in front of FMFMII Government Building, kicking off the first of many events planned for what will be a year-long celebration of the country’s diamond jubilee.

The launch comes after Independence Organising Committee advised the opening of entries to local and overseas Samoans to design the logo and theme of this 60th Independence Anniversary.

In her opening remarks, Prime Minister Hon. Fiame Naomi Mata’afa announced Bluwave Samoa as the winner of the competition. Bluwave Samoa is a New Zealand and Samoa based company owned and operated by Samoans. The Prime Minister congratulated Bluwave and described the cultural institutions and historical events depicted in the design which are symbolic of Samoa’s pathway to Independent nationhood.

“Ladies and gentlemen, the event this evening is to officially launch the logo and theme for our 60th Independence Anniversary celebrations,” said Hon. Fiame. “Congratulations to Bluwave Samoa. A company based in New Zealand and Samoa, owned and managed by Samoans.”

”The logo depicts significant historical events that shaped our path to Independence, our traditions and our Christian values and beliefs as stipulated in our Constitution. It also depicts the Mau movement, a significant historical event in our strive for independence, symbolised by the single white stripe on the number sixty (60). The Southern Cross constellation as shown in our flag portrays our faith in Jesus Christ and Samoa as a Christian nation. The logo’s design illustrates traditional Samoan motifs that reflect our unity as a nation and support for each other. As such the theme selected for the 60th Independence Anniversary is “Folau ma le Fa’atuatua” (Sail with Faith).

Hon. Fiame also took the opportunity to reflect on Samoa’s journey as an independent nation, reminding Samoans that the journey was not always easy, particularly for our forefathers, past and present leaders of Samoa who contributed to Samoa’s development.

"Challenging? Yes definitely - but it has also been rewarding for all the generations that have traversed this important phase of our history," Hon. Fiame said. "We thank God for his divine guidance and direction over our Independent State, for without Him we would not have survived the torrent and raging seas of nation building.”

"We acknowledge with humility and gratitude the efforts and sacrifice of our forefathers, past and present leaders, and all citizens of Samoa for their contributions to building our country to what it is today. We also pay tribute to all our development partners who have worked in partnership with Samoa to help us achieve our development aspirations.”

"Let me also take this opportunity to thank all those who participated in the competition. The wealth of your artistic expressions and creativity is commendable."

The logo design and theme competition received fifty-nine (59) entries from talented artists and graphic designers in Samoa and from Samoans abroad, all vying for the prize money of SAT $5,000. The winning logo and theme by Bluwave Samoa will feature prominently in all related events and promotions to celebrate Samoa’s diamond jubilee.

Hon. Fiame concluded the formalities by reminding everyone that the logo and theme will become the property of the Government and all legal requirements must be followed when using it for any purpose. Deputy Prime Minister, Hon. Tuala Iosefo Ponifasio was given the honour of unveiling the logo in front of the Government Building to close the ceremony before government officials and members of the diplomatic corps joined the coinciding Waterfront Night Market event at the Samoa Cultural village.