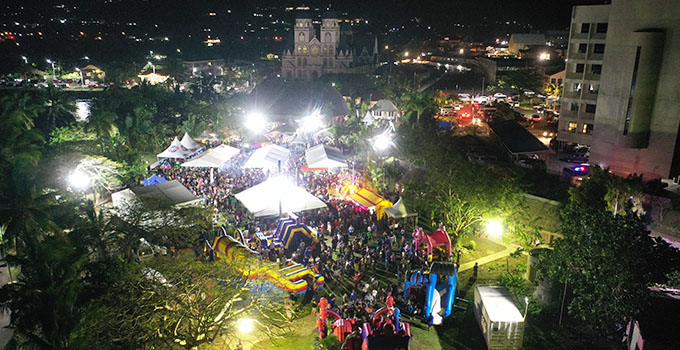 Despite being scaled-back due to Covid-19 and the closure of Samoa’s borders, this year’s 31st Annual Teuila Festival was a resounding success.

Among the events which took place this year were sports competitions which plan to include international teams in 2022. These include the United Soulz Netball Tournament, Apia City Run by Samoa Events, Alo Paopao Teuila Business House Regatta, Teuila Tag Tournament by Samoa Tag Incorporated and the Teuila Volleyball Tournament by Volleyball Samoa Federation which wraps up this weekend.

According to STA CEO Fa’amatuainu Lenata’i Suifua, the response from the public was fantastic and the Teuila Festival definitely provided something to look forward to.

Based on crowd-size and feedback from vendors and visitors, the highlight this year has to be the bustling two-day Waterfront Market held at the Samoa Cultural Village in partnership with Samoa Hotels Association.

The carnival atmosphere at the Market saw hundreds enjoy live music and cultural performances, fun activities as well as stalls which offered a variety of tasty food items, arts and crafts and plants. Competitions to encourage people to get their Covid-19 vaccination were also held and drawn at the Market.

The monthly Waterfront Night Market is back on 24th September.