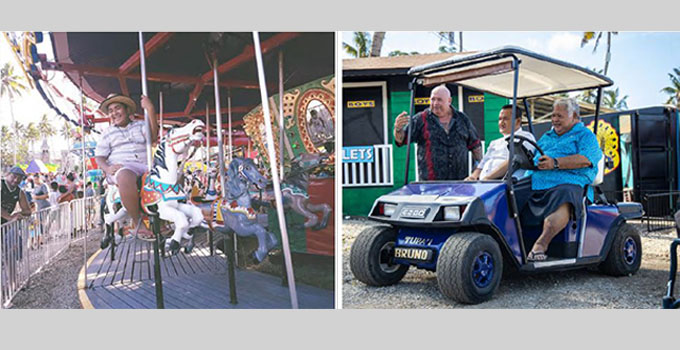 Samoa’s first amusement park is going very well and according to plan. Since opening its doors to the public a month ago, the ‘Samoa Fiafia Park’ has been buzzing with excited crowds in long queues outside the funfair towards the entry gates.

The owner and well known ring master of the Magic Circus of Samoa, Tupa’i Bruno is thankful and very happy.

“It’s Going very well as anticipated and the so many people that have visited are very happy and quite surprised that we have such an amusement park in Samoa.” Said Tupa’i.

The amusement park was officially opened by the Prime Minister, whom congratulated Tupa’i and his team for bringing such fun activities for Samoa.

This is however the first phase of more to come from Tupa’i and his team who are looking to also enticing visitors from overseas.

“Tourism is slowly building up and there’ll be alot of visitors to filter through from American Samoa.” He added. “I sincerely thank the Prime Minister and the Government of Samoa who have gone out of their way to making this dream come true.”

“I encourage everyone to come along and enjoy Samoa’s amusement park for the first time.”

Located at Tafaigata, the park has close to 20 rides with admissions of $6 tala for kids, $12 tala for adults and rides at $2 tala each.

Opening dates at the moment are on the weekends on Saturdays and Sundays.