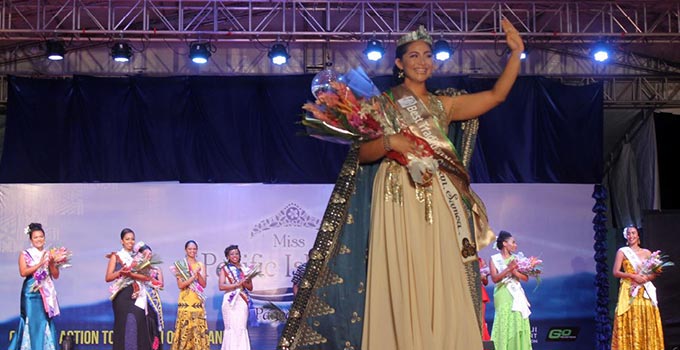 The 24 year old was officially announced the winner tonight, and crowned by the outgoing Miss Pacific Islands, Anne Dunn in front of a packed stadium at Prince Charles Park in Nadi, Fiji.

American Samoa last won the title 15 years ago, when Lupe Ane Kenape Aumavae was crowned in the Cook Islands in 2002. This is the sixth time the title has travelled to American Samoa.

In receiving the title, the new Miss Pacific Islands was overwhelmed with emotion and could not hold back tears as she acknowledged everyone, including her father who recently passed away.

“To my dad, I wish you were here,” said the new Miss Pacific Islands with tears of joy. “To my families and friends, to my team and especially to my country, thank you all so much.”

Miss To’omalatai was born in Onenoa, American Samoa, and was studying nursing at the University of Hawaii at Kapi’olani Community College before she entered the Pageant, with her goal of becoming a registered nurse specialising in treatment and care of diabetes patients and bring about awareness on diabetes.

She recently worked for the American Samoa Visitors Bureau, and will now focus on fulfilling her role as the Pacific Queen.

It was a feeling of warmth witnessed on stage amongst the nine beautiful contestants, in what is a fitting finale to what has been a hectic and fun-filled week of activities for the contestants from around the region, in the place where happiness finds you, Fiji.

On the theme of Climate Change to Sustain our Islands, the judged categories of the Pageant were divided into three nights, with the crowning on the fourth and final night as witnessed also by the Pacific region and around the world, through livestream coverage broadcasted through Fiji TV.

The main and special awards for this year’s Pageant are listed below.

The Host for the next Miss Pacific Islands Pageant is the Kingdom of Tonga. View photos and take a look at the events of the Pageant week on Website: