Alexandra carries the hopes of a nation 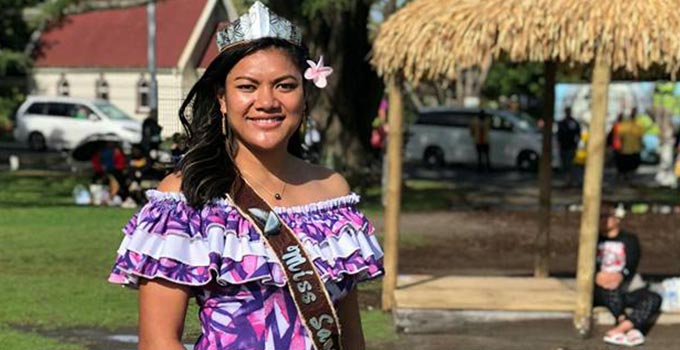 Miss Samoa, Alexandra Iakopo is mindful of the responsibilities she is shouldering as one of the nine regional contestants vying for the Miss Pacific crown taking place in Nadi, Fiji this week.

She has been forewarned by her Prime Minister before heading to Nadi that she will shoulder the high expectations of her country, in particular the pride and reputation of a Tamaitai Samoa.

She knows full well that Samoan women are famous when it comes to their identity as achievers, decision makers and as the pillar or foundation of families, societies and our country.

The 23 year old Qualification Officer with the Samoa Qualification Authority needs to meet these high expectations and is in Nadi for a reason.

Her personal journey is a telling one, having cheated death twice after surviving two life-threatening heart operations.

And in recent weeks the passing of her father, the late Deacon Isaako Iakopo. She is in Nadi and remains firm in her resolve that after all, there is a reason why her father in heaven wanted her to be where she is today.

In memory of her late father, she dedicates her participation in the Miss Pacific Pageant to him.

“When I was crowned Miss Samoa, my dad encouraged me to do my best and said God will take care of the rest,” she says. “I know he is with me in spirit and I will fulfill his wishes to be the best that I can be.”

In celebrating 31 years of the regional Pageant, the Miss Samoa who is a vocal and outspoken advocate for universal education says that the Pageant is more than just a beauty contest.

“The Miss Pacific Pageant is a testament to the pivotal role played by Pacific women in their respective countries.

“The Pageant is about womens’ perspective and to recognize with respect their contribution as family makers as well as decision makers in all sectors from non-government to government and civil.

“In many cases, they are also the breadwinners for their families, churches and societies.

Alexandra also acknowledges the Pageant as a platform for Pacific fashion designers and artists to showcase their talents and natural flairs as original creators.

“It’s about encouraging young ladies that they can be anything they want to be if they believe in themselves,” she added.

Educated in Samoa and a graduate from the Colorado Monarch High School in California USA, Miss Samoa is ready for the unexpected.

“I have faced challenges that have strengthened my faith, eager to grow as an individual, serve and share my culture with the world, and contribute to the sustainable development of Samoa,”

Alexandra holds a Bachelor of Arts degree from the National University of Samoa (NUS). She started as a hotel receptionist before taking up her studies and did an internship with the NUS Governance Policy Planning Unit, and as a Support Officer with the House Disability Division of the Australian High Commission.

She is the second youngest in a family of three brothers and one sister.

Alexandra is contestant five. The Pageant categories are spread out in four nights with the finale on Saturday, 9th December at Prince Charles Park in Nadi.