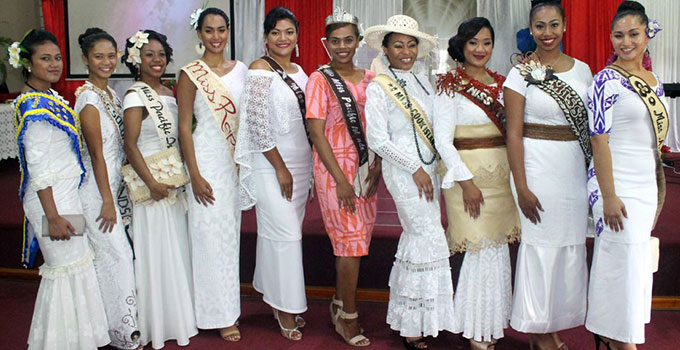 The nine Pacific beauties renewed their faith in the Lord, and acknowledged His blessings to begin a new week of activities for the 31st annual Miss Pacific Islands Pageant in Nadi, Fiji.

After arriving and settling-in over the weekend, the Contestants and the reigning Miss Pacific Islands began the pre-Pageant week’s activities by attending a Sunday service at the International Full Gospel Church.

The Ladies were moved and touched by the service, and the reigning Miss Pacific Islands, Anne Dunn initially acknowledged the church Ministers and the congregation.

“I am blessed today with the message on the miracles by God, and honoured to be in the presence of such faithful and servants of God,” said Miss Dunn.

“It is a blessing to share this spiritual moment with the beautiful Pacific Queens, which is very fitting to begin the Pageant week, and I wish them all the very best.”

The nine contestants each introduced themselves and shared their appreciation of the Lord, and also acknowledged the church leaders with members of the congregation.

Following the church service, the ladies visited and enjoyed the fresh scents of the Garden of the Sleeping Giant just outside Nadi, where they conducted the official photo shoot and later treated to a luncheon in town.

Further Pageant activities for the week include other visits to tourism sites and resorts around Nadi, before judged events and categories spread throughout four Pageant nights such as the pre-Pageant Interview, opening performance and introduction, sarong, traditionally inspired attire, stage interview and talent.

To view Photos and to follow developments of the Pageant including how to vote online for your favourite Pacific Beauty, visit Website: