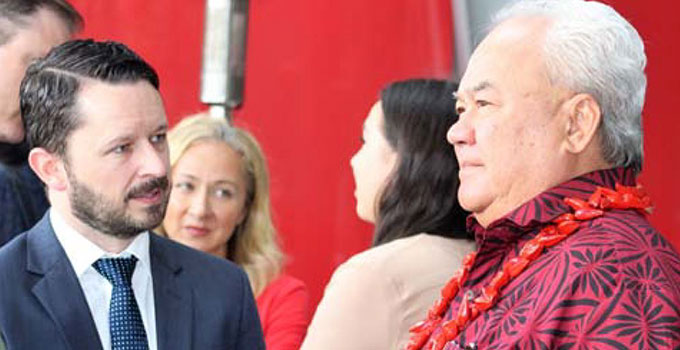 Travel traders in Sydney Australia are so enchanted with Samoa’s re-established national carrier that they remain steadfast to continue to sell, sell, and sell more tickets for tourists from Down Under to come to Samoa.

Over 30 wholesale travel agents and airline contracting managers and who’s who in the Sydney travel agent industry reaffirmed their loyalty to Samoa Airways, through a long mutual partnership established by the Samoa Tourism Authority(STA) many years ago for tourism to remain as the mainstay of our country’s economy.

New Zealand and Australia as the main tourism source markets for Samoa accounts for 80% of tourism revenues injected into the local economy every year. Moneywise, that’s 80% of over $300 million tala in annual tourism revenues pouring into the country year in and year out. And the numbers continue to rise slowly but surely.

And for their trust and patronage, our Aussie friends received a Ministerial commendation in person by Airlines Minister Lautafi Fio Selafi Purcell during the Australia Trade Launch for Samoa Airways in Sydney on the 16th of November.

“To say that our Government and the Samoan people are in your debt is an understatement,” complimented Lautafi.

“You remain firm on your resolve to serve our country and for that, thank you. “On that note I implore you to continue your crucial role by supporting our new national airline, Samoa Airways.

“I give you my personal assurance that as the Airline Minister you will not be disappointed.”

The same audible affirmative reception was delivered in person to the Prime Minister, Hon. Tuilaepa Fatialofa Lupesoliai Dr. Sailele Malielegaoi by the New Zealand travel trade in Auckland a week earlier when Samoa Airways made her grand debut with her maiden flight from Faleolo to Auckland.

And it’s all part and parcel of a well calculative plan brainchild by STA Board to strategically retain their trade travel stakeholders commitment when Samoa Airways takes off to the sky this month.

For STA Board from Madame Board Chairman, Adele Kruse to Chief Executive Officer, Papali’i Sonja Hunter who attended the two Trade Travel engagements, have earned praises from the Samoa Airways Minister.

“It’s huge ask considering the tourism and airline industries are among the most competitive businesses in the world.

And for Samoa’s tourism sector to remain competitive despite the odds, is a telling story,” complimented Lautafi. “The STA Board and its Chief Executive Officer deserves recognition for their endurance and commitment to take Samoa’s tourism to the next level.

“Samoa has an enormous amount to offer to our international visitors, and Government remains committed to help the tourism sector continue to grow, through investments such as Samoa Airways.”