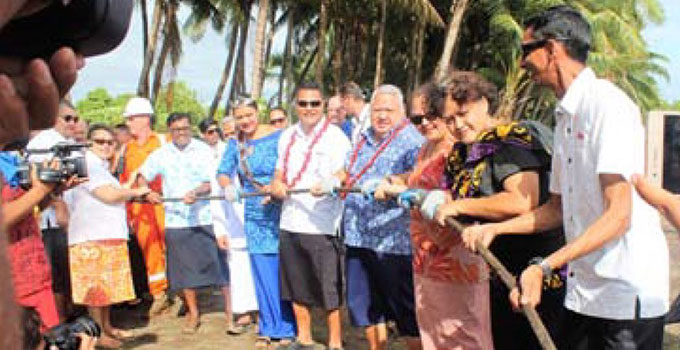 Government’s vision for Samoa to be ICT hub by 2020 took a leap frock this week with the arrival of the Tui-Samoa Cable at Moataa village.

But that is not stopping government from taking the in exploring more fibre optic cable networks to leverage Samoa as the Pacific Hub in Information Communication Technology, reassures Prime Minister Tuilaepa Lupesoliai Dr. Sailele Malielegaoi.

“The success of the Tui-Samoa partnership has provided the Government with the confidence to facilitate new partnership amongst other Pacific Islands for new submarine cable projects,” he elaborated in his acknowledgement speech.

“The next exciting project is the Manatua Cable linking Tahiti, the Cook Islands and Niue to Samoa.

“Not to mention a bold regional project called the “One Pacific Cable” which could potentially link Micronesia and Melanesia to Polynesia and involve 10 island nations (Guam, Federated States of Micronesia, Nauru, Solomon Islands, Vanuatu, Republic of Marshal Islands, Kiribati, Tuvalu, Tokelau and Samoa).”

The Prime Minister noted that among the strategic reasons for developing the Tui-Samoa Cable are to:

The other important deliverable for Tui-Samoa is connectivity, will be a key driver in realizing the ambitions of the United Nation Sustainable Development Goals for small island developing states including Samoa as we strive to ensure that we do not leave anyone or any place behind. This is especially true when only 18% of people in Least Developed Countries use the internet, compared with 80% in developed countries.

The Tui-Samoa will ensure that Samoa, Wallis and Futuna and Vanua Levu Fiji will not be left behind. “Connectivity is therefore a vital ingredient of structural transformation and sustainable development, and critical to the efforts of Small Island developing states to graduate from least developed status,” continued Tuilaepa.

“Connectivity will be crucial to building resilience in our economy, so that we can tackle the many other complex issues we are confronted with, including climate change.”

The Prime Minister also complimented the support of the development partners in making the Tui-Samoa Cable a reality.