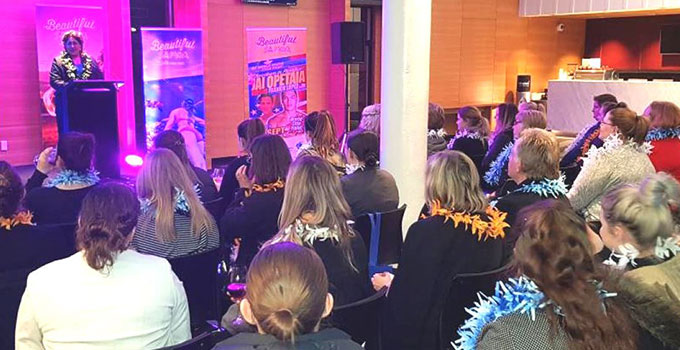 The Beautiful Samoa New Zealand Roadshow 2017 kicked off by warming up the largest city in the South Island and the seat of the Canterbury Region, Christchurch.

Travel Trade and Media professionals from around New Zealand’s Garden City, gathered at the Hagley Oval Pavilion to see attractive deals on offer and liaised directly with representatives of the Samoa Tourism Industry, who introduced their new and existing products and services for the NZ market.

With winter in full swing the aim is to attract the many Kiwis who wish to go away and have a tropical experience that Samoa offers. The Samoa Tourism Authority (STA) led the Samoa delegation with efforts to further penetrate and also develop new market segments in this main source market for Samoa.

The travel experts who attended the event in Christchurch were officially welcomed by the Chairperson of the STA Board, Adele Kruse, with the keynote address by the STA CEO, Papali’i Sonja Hunter, who thanked the travel trade partners and airline representatives for their commitment in selling Samoa Holidays and Travel in the past year. She reiterated on some of the key areas of focus for Samoa Tourism, including Awareness campaigns, Airlines - especially the new jet services by Polynesian Airlines now re-established as Samoa Airways, Accommodation, Accreditation and Attractions.

An exciting upcoming event staged at this year’s Teuila Festival in the first week of September is the ‘Showdown in Paradise’, where Jai Opetaia will fight in the main event for the IBF Cruiserweight World Youth Title on September 7th at the country’s state of the art international sports facilities at the Tuanaimato Sports Complex.

The travel trade commented on how wonderful it will be with additional Airline capacity and new wholesale fares enabling more attractive Inclusive Tour Package deals to Samoa.

Russell Mein of World Travellers, who has been with the Travel Industry for almost 30 years bringing visitors to Samoa for that long is pleased with the exciting upcoming events and new developments for Samoa.

“The new airline provides a healthy competition for Samoa, and will definitely increase the numbers our interested clientele who want to travel to Samoa.” Said Mr Mein. “It’s also great to see some new properties in Samoa and also knowing about some of the developments in the not too distant future.”

House of Travel’s Rebecca Kenning said that, “it’s great to have another airline service for Samoa which will definitely provide more and attractive options for our clientele as we continue to sell Samoa.”

The Samoa delegation provided new information on offers and enabled existing and new partners with competitive rates to ensure higher occupancy rates for the remaining months of 2017 and 2018.

John Stewart of Air New Zealand announced an increase in their flights to Samoa this year and next.

“We’re growing our Samoa operation and will move to wide body aircraft at least twice weekly year-round which will add at least 14,500 seats between Auckland and Apia annually.” Said Mr Stewart.

“In addition to our existing smaller aircraft services of A320, we will operate a combination of Boeing 787-9 Dreamliner and Boeing 777-200 aircraft on Thursdays and Saturdays from September this year, increasing to four big aircraft services weekly in the summer peak between December and January next year.”

Mr Stewart added that the change will see capacity increase to Samoa by 13% in the shoulder season and 10% across the year.

The Beautiful Samoa New Zealand Roadshow was from the 1st to the 3rd of August visiting the three cities of Christchurch, Wellington and Auckland.