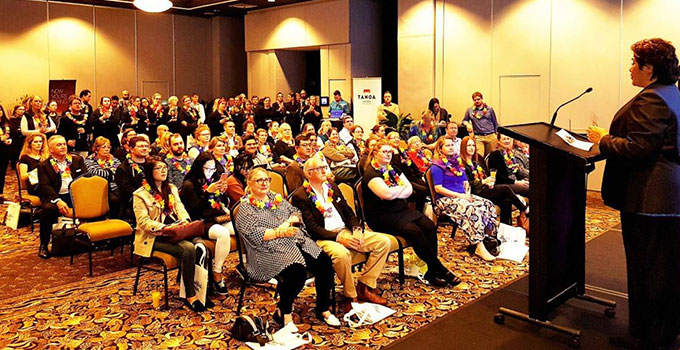 The Beautiful Samoa Australia Roadshow 2017 began with a bang in the most populous city in Queensland, with close to a hundred Buyers of frontline travel agents, reservation consultants and travel trade media converging with excitement in the heart of Brisbane city to see what Samoa and her friendly people had on offer. Similarly was the next stop in chilly Melbourne, Victoria before an exceptional finale in the state capital of New South Wales, Sydney with up to 200 Buyers attending.

With the aim of attracting the Aussies this winter to visit the tropical paradise, the Samoa Tourism Authority (STA) led a delegation of Samoa industry leaders to introduce new products and services in efforts to further penetrate and also develop new market segments.

One of the well-received announcements during the Roadshow include the reestablishment of the Polynesian Airlines jet services this year.

The CEO of the Samoa Tourism Authority, Papali’i Sonja Hunter in her official remarks in all cities, thanked the members of the travel trade partners and airlines for their commitment in selling Samoa Holidays and Travel in the past year. The Industry members from Samoa who attended the Roadshow spoke highly of the opportunity to meet existing partners and most importantly in establishing new ones.

The Travel Trade members spoke positively about the new flights which are to be provided by the new Samoa Airways (Polynesian Airlines) from Australian cities by the end of 2017. Not to be outdone, Fiji Airways provided tickets to the Destination to be drawn and appreciated by winning Travel Agents in addition to announcements of upcoming flights in November to Samoa via Nadi with only 40 to 50 minutes stopovers.

There was a new feeling of enthusiasm at the shows with most of the travel trade commenting on how wonderful it will be with additional Airline capacity and new wholesale fares enabling more attractive Inclusive Tour Package deals to Samoa.

The Samoa delegation provided new information on offers and enabled existing and new partners with competitive rates to ensure higher occupancy rates for the remaining months of 2017 and 2018.

New contracts with new partners urged all to design new itineraries on special interest combinations that aligned the usage of sports tourism with the usage of the state of the art sports facilities, and visits to the various swimming areas that are linked by the Natural Attractions of Samoa that are known as the Sites for the Love Of Water (SLOW) which is being assisted through the development assistance of the New Zealand Government through the Samoa Tourism Growth Partnership.

The interest in the development of main sporting events and corporate meetings were discussed with specific interest travel trade groups which were prompted by the STA and includes Student of prominent Schools for Rugby Tours, Boxing Events and NRL Fixtures with which the main sporting organisations will be sought for the integrating of all to benefit the sports and youth development through sustained exposure. Some of the points raised by the travel trade of which Samoa remains a preference is its safety environment, organic development in agriculture and usage of organic ingredients in delicious cuisine, garden tours; the natural sites inclusive of a new find in the cascading waterfalls of Lalotalie and Vai o Sina at Faleaseela; the ever so popular To Sua Trench; the unscathed beaches where Survivor Australia was recently filmed, and the unique culture of the most friendliest people.

The revelation of Samoa’s re-established airline and upcoming events have certainly captured the attention of the Travel Traders in Australia, as echoed by Angie Kemp of Omniche Holidays in Brisbane. “These are very great and exciting times for us and of course for Samoa, as we look forward to definitely bringing more Aussies to your beautiful country.”

Likewise were the thoughts from representatives of Travel Managers and Helloworld in Melbourne.

“Everyone comes to Samoa’s roadshows to learn not only about your new tourism products, but most importantly about heart, and about your people.” Said Brett Ray of Travel Managers.

Anita Coombs of Helloworld agreed and said, “It is more exciting now with Samoa’s own airline which is great news for us and our work in getting people to come to Samoa.”

Flight Center representatives in Melbourne were fascinated with what Samoa had to offer.

“We’ve been captivated with your upcoming events announced tonight especially with your new airline, which is really good for Samoa and our clientele.” Said Abi Ward.

Jessica Arnott added that, “the setup of your Roadshow is very unique from all others and the presentations tonight on the approaching events by Samoa is very exciting.”

The Sydney show capped off an ideal week of discussions and negotiations, and travel representatives for Hoots Holidays were pleased to hear of the upcoming events in Samoa.

“The event tonight has been really fantastic and it’s really good to meet the people from resorts and accommodations in Samoa.” Said Kirsty Mckenzie of St Ives Travel. “Very excited and looking forward to coming to Samoa.”

Suppliers of products from Samoa had the chance to deal directly with the Buyers and negotiate deals, where some buyers won themselves fabulous prizes provided by some Suppliers, including a very enticing prize from STA for Australian Buyers who sell and bring more tourists to Samoa.

The Madam Chairperson of STA’s Board of Directors, Adele Kruse led the Samoa Tourism team and offered prayer to begin the events, and remarked also on the way forward for Samoa Tourism. The Consulate-General of Samoa to Australia, Fonoti Etuale Ioane attended the show in Sydney, together with some of those within the Samoan community in the Land down under.

The Beautiful Samoa Australia Roadshow 2017 was from the 25th to the 27th of July. The Tourism Roadshow now heads to Aotearoa New Zealand.