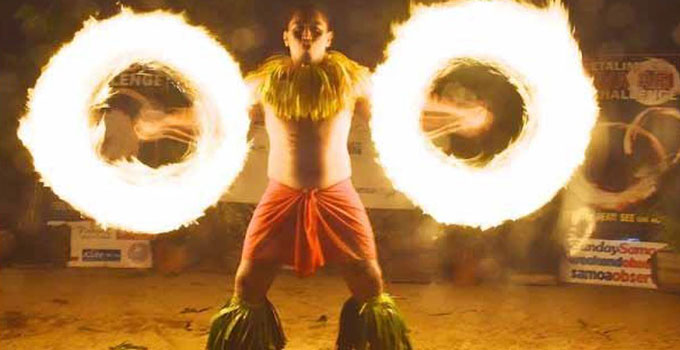 Twenty-year-old Lene Alema fromTufuiopa of the Le Manumea Hotel was announced the King of the “Faletalimalo Siva Afi Challenge 2017.”

Held last week on Tuesday, the champion went up against Vaelaa Iloa of Jet Over Hotel and Poasa Tupou of Sheraton Aggie Greys, Mulifanua.

Not only did Mr. Alema received $1,000, but he now gains automatic entry to the International Siva Afi Competition 2017, which will be held in Apia, from 30th August – 2nd September.

The challenge began in the first week of March this year and it went on for about 12 weeks with two performers from each hotel going up against each other during the elimination rounds.

Galumalemana Patrick Rasmussen and Kome Feagaimalii were the expert judges of the challenge. Jet Over Hotel Manager, Ms Donna Stanley travelled from Savaii for the elimination rounds, quarterfinals, semifinals and for the final.

She congratulated the three finalists of the 2017 Faletalimalo Siva afi Challenge.

“It was an amazing night as the three finalists showcased their talent at the finals of the Faletalimalo Siva Afi Challenge,” she said.

“Congratulations to the winner, Le Manumea and Sheraton as the 2nd runner up however, our Vaela’a did us proud by making it to the finals and earning his place as the 1strunner up.”

Ms Stanley added, “Jet Over Hotel represented all hotels in Savaii along with Amoa Resort and Le Lagoto Resort and we’re all looking forward to next year’s Challenge!”

“Congratulations to Le Manumea Hotel for the win, their champion was truly amazing, his skill has to be seen to be believed,” said Mr. Francis.

“Sheraton Samoa is very pleased to be associated with the Faletalimalo Siva Afi Challenge.”

“Our four warriors had a great competition and with our youngest reaching the final; we are very proud of you Poasa.

Sheraton Samoa will be back next year, stronger than ever, challenging for the #1 victory.” “Well done Lene and Geoff you ran a class event, I personally enjoyed attending the weekly completions.”

The owner of Siva Afi told the Sunday Samoan that the challenge brought in more talented dancers from around Samoa.

“The 3rd runner up of the night Poasa Tupou - he is new but the way he performed during the elimination round as well as in the finals, was brilliant,” he said.