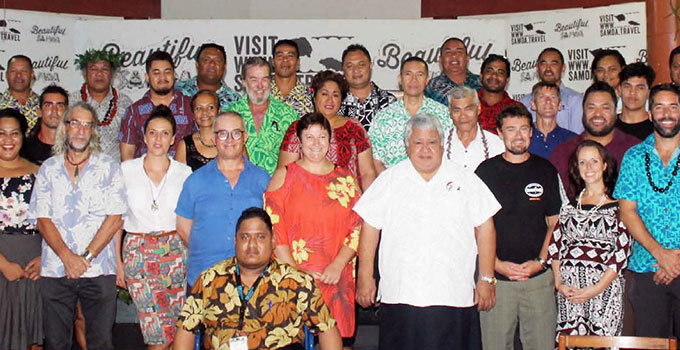 The top rating reality TV show in Australia - Survivor Australia has once again farewelled the Government and people of Samoa following another successful filming across its beautiful shores.

The new series will be aired across Australia on Channel TEN, featuring the natural backdrop that is beautiful Samoa. Endemol Shine Australia, which produced Survivor hosted a farewell ceremony to acknowledge the Governmentt of Samoa and its people, which was attended by the Hon. Prime Minister, Government representatives and private sector bussinesses who worked with the Survivor crew.

“On behalf of Survivor Australia I want to say thank you to beautiful Samoa and everyone for another fabulous year of Australian Survivor.” Said Mr Adrian Pegg, the Line Producer of Survivor.

“Above all, it is the welcome we’ve received and the friendliness of the people that has struck me the most. I’ve come to the conclusion that Samoans must be amongst the friendliest people in the world. My heartfelt thanks goes to all of them.”

Over the last few months Survivor Australia this time around filmed 41 huge challenges in 16 primary locations all over the country, as well as filming day and night for 55 days on Samoa’s beautiful beaches.

Survivor Australia employed around 300 people a week and overall and have had more than 500 Samoans on its payroll.

“We are humbled to have been chosen by Survivor again for the Australian series.” Said Tuilaepa. “But despite having hosted such a global television phenomenon, we have managed to preserve the beauty and untouched nature of our surroundings which is testament to our commitment and love for our country and its pristine environment.”

Tuilaepa also acknowledged in particular Ms Leisa Francis who has been instrumental with the Samoa Tourism Authority right from the start in bringing to Samoa the first filming of Survivor.

Ms Francis in an emotional speech thanked Tuilaepa and all those that were involved, and presented the Prime Minister with a gift, a signifying torch from Survivor.

Visit www.samoa.travel and experience for yourself the settings that keeps Survivor returning to Samoa.