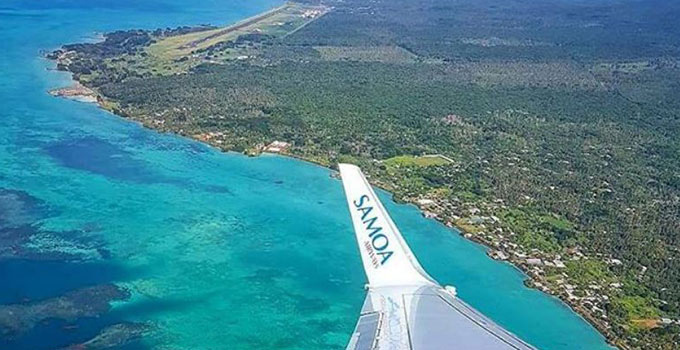 Under the proposed partnership, Fiji Airways will provide initial support to Samoa Airways to help launch its international services to and from Apia to Auckland and Sydney through the use of its established infrastructure in sales, commercial, operations and maintenance. “We are happy to play a support role to help reboot Samoa’s international airline”, said Fiji Airways’ Managing Director and Chief Executive Officer, Andre Viljoen.

“The proposed commercial partnership between Samoa Airways and Fiji Airways is another extension of the already close relationship Fiji Airways continues to enjoy with the Government of Samoa in terms of promoting improved air access into Samoa from other markets outside of New Zealand and Australia”, he further added.

The Chairman of the Board of Polynesian Airlines, Mr. Feesago Siaosi Fepuleai confirmed that with the signing of the Memorandum of Understanding, separate commercial and operations agreements are now being negotiated between the two airlines which will form part of the overall Pacific Partnership Alliance Agreement between Samoa Airways and Fiji Airways.

“The MOU we signed today gives both airlines a broad and strategic framework of how the Pacific Partnership will be negotiated and finalised”, Feesago stated. “Under the MOU, there will be specific routes like Samoa to New Zealand and Australia that will be solely managed by Samoa Airways and other routes where both Airlines will jointly manage through codesharing and interlining”, Feesago added.

According to Mr Andre Viljoen, “We are very pleased the MOU has now been signed so both airlines can progress and conclude negotiations on the Pacific Partnership Alliance as soon as possible. Fiji Airways has been the leading airline of the South Pacific for decades, and we’re more than happy to help Samoa Airways’ efforts to re-launch international flights”, Mr Viljoen stated.

The Prime Minister of Samoa, Honourable Tuilaepa Dr Sailele Malielegaoi congratulated both Fiji Airways and Samoa Airways on the signing of their MOU signifying the first step they have jointly taken to cement their union in the form of a Pacific Partnership Alliance.

“The decision by our Government to pursue a commercial partnership with Fiji Airways was driven mainly by the critical need to look beyond New Zealand and Australia and open Samoa up to the world through Fiji Airways’ long-haul network which includes direct flights from Los Angeles, San Francisco, Hong Kong, Singapore into Nadi and potential connectivity opportunities presented through its larger network with its other airline partners”, he explained.

“The proposed partnership between Fiji’s National Airline and our own National Airline is a testament to the strong bonds that we share as island nations in the Pacific Region and embraces our Pacific Way of doing things”, he concluded.