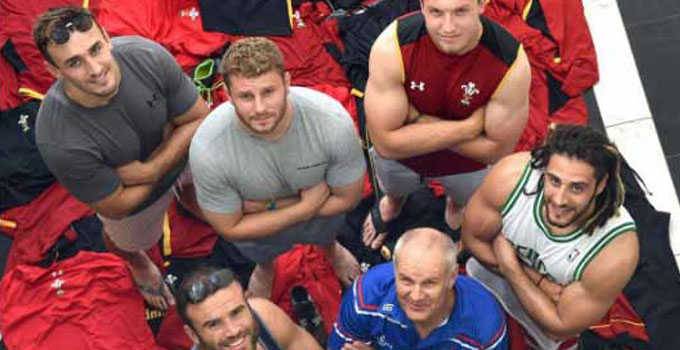 Wales' rugby players ended their two-test summer tour of the Southern Hemisphere by donating a mountain of kit to Samoan school children as a thank you for their warm welcome in Apia.

Following their narrow 19-17 test mach victory against Manu Samoa in the capital of the beautiful Islands in Apia last week, the Welsh team gave away shirts, shorts, boots and other gear to the nation’s youngsters.

The Welsh Rugby Union also showed support for their Samoan counterparts by gifting head coach, Namulauulu Alama Ieremia’s squad their tackle pads, shields and body armour suits for training. Their opposition on the evening of Friday, 23rd June at Apia Park Stadium will be able to benefit from the equipment straight away, with an allimportant game against Pacific Island opponents Tonga this weekend.

“We know Samoa has a lot of rugby talent, but not necessarily the infrastructure to support that,” said Wales fullback Gareth Anscombe.

“It’s great to give something back to the people here. They’re rugby mad and even in 30 degree heat you can see them wearing match jerseys and other shirts.

“I’m sure the gear will be like gold to them and hopefully it will mean the world. If it helps us have a few more Welsh fans in this part of the world, then that’s all the better.”

Wales have secured back-to-back wins over Tonga and Samoa in the last fortnight and flew from Apia to Auckland and completing their long journey to Cardiff.

Anscombe added: “We’ve had a great welcome here in Samoa, everyone has been so generous and friendly and everywhere you go people are keen to say hello to us.

“This is a nation which loves its rugby as we saw in the game on Friday. It rained all night, but still the people came out in large numbers to show their support. We’ve really enjoyed playing here.”

The Welsh Rugby Union hopes the gesture will go a long way to helping both those at the highest level and young children dreaming of making it to the international game.

Brian Hopley of the Samoa Rugby Union, said: “The Wales boys came to us through their team manager and said they’d like to donate some kit from their tour.

“We will take it out to the villages around Samoa and it will help massively with the development programme we run around both islands. The kids will love it because in Samoa, they simply don’t have this sort of gear. For the next generation it can be quite hard to get any rugby kit at all.

“We work with children of all ages including primary and secondary schools and this gesture is a fantastic show of support from the Welsh Rugby Union. In the Samoan Rugby Union we aren’t that financially well off, so this support is fantastic and we really appreciate it.

“It’s been great having the Wales team here in Samoa. We don’t have many tier one nations come to the island and whenever it happens, it’s something we look forward to".