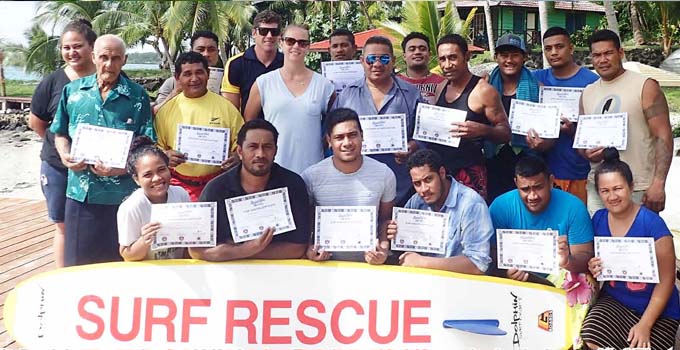 Two separate sets of training were carried out last week for the big Island, with one held at Jane’s Beach Fales for the Manase area and the other at Va-i-Moana Lodge for Asau.

The training is to improve water safety response within the Accommodation providers and tourist sites.

Trainings are carried out by the STA Planning and Development team, with technical expertise from two Certified Australian Surf Life Saving Trainers through the Australian Youth Ambassador Programme.

STA is currently at its 5th year of implementing Surf Rescue Training Programme. The programme is designed to upskill industry members with Surf Life Saving Techniques which include Basic First Aid, CPR and Water Rescue training.

Additionally, we will be offering a refresher course for staff that had completed SLS courses in the previous years.

Surf Life Saving in Samoa has been in the development stages since 2009. In response to the 2009 tsunami, in May 2010 the Government of Samoa and the Government of Australia commenced a program known as the Volunteer Emergency Response Team - Water Safety Programme (VERT-WSP).

The volunteers involved with VERT-WSP were trained in Bronze Medallion Courses and to strengthen this capacity, AusAID approved a three year program, where two Australian Youth Ambassadors for Development (AYADs) would be mobilized each year from 2011 to 2013 and hosted by the Samoa Tourism Authority to deliver training programs to tourist resort staff and local residents.