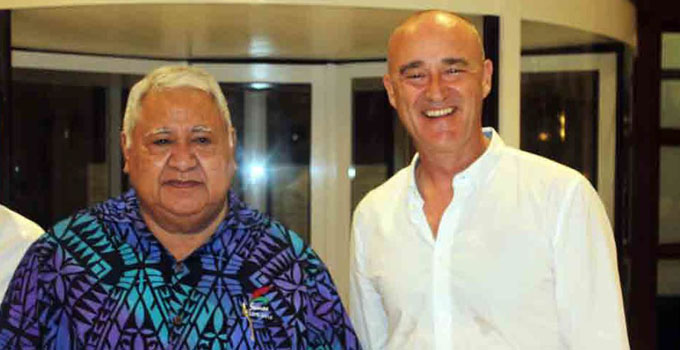 Earlier this year, Australia’s Network TEN announced Samoa as the chosen location for its rugged beauty and remoteness.

Edemol Shine Australia is producing the show, and its team with Network TEN were welcomed to Samoa by the Prime Minister in a reception at the newly opened Sheraton Samoa Aggie Grey’s Hotel and Bungalows at Vaisigano.

“I wish to thank you for selecting Samoa as your film location this year, and be bold enough to thank you in advance for our partnership in more years to come.” Said Tuilaepa.

“Our government since the filming of Survivor USA on our shores in 2009 and 2011 have recognised the importance of these filming partnerships, with job creation for our people and the injection of new money, into our villages, businesses and generally into the Samoan economy.

“I am most aware, that if there is any group who are more aware of the blessings that come with filming productions, it is definitely the village employees, who at the completion of each filming project tell my officials to try and retain the film company in Samoa, for more.

“It is this and much more that we are keen to host you and many more filming projects.” Added Tuilaepa.

One of the benefits from this project is the promotional leverage that Samoa will gain in Australia, with 32.5 hours of prime time television, in addition to the pre-airing promotions of the show, which is marketing air-time that our small country cannot afford, at market rates on the Television TEN Network.

A reported 15,000 Australians auditioned to be part of the series. 24 Australians have been casted where they will compete in various challenges while marooned in a secret location with only the most basic instruments to survive.

One by one tribe members will vote out fellow competitors until the remaining one to be declared the winner of the series.

The show will be hosted by Australian celebrity Jonathan LaPaglia.

Production has now begun in a top secret island location and will air on Channel TEN later on in the year.