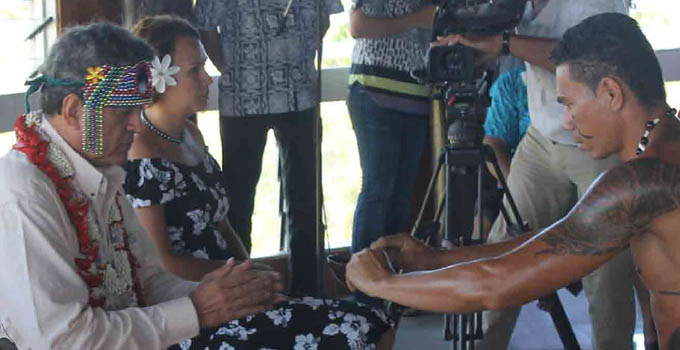 Tahiti President, Edouard Fritch was honoured by the Grey family and the Goverment of Samoa, by bestowing him with the Paramount Chief Title Tagaloa from Safune, Toamua on Friday, 29th April 2016.

The traditional bestowal ceremony was held at the Sheraton Samoa Aggie Grey’s Resort in Mulifanua, performed by chiefs of Toamua village and STA, and witnessed by the Prime Minister, Hon. Tuilaepa Fatialofa Auelua Galumalemana Lupesoliai Dr. Sailele Malielegaoi, who attended this historic event with some of his Cabinet Ministers, Associate Ministers and the delegation from Tahiti.

Prime Minister, Tuilaepa also gave his blessings to Tagaloa, wished him well in carrying the title and reminded everyone about the importance of this event, in rekindling the unity between the two countries and that we as Polynesians are one.

Tagaloa Edouard Fritch showed great appreciation in accepting this honour and thanked everyone.

“Thank you for gathering here today and for this honour, and I hope for God’s help to guide me in carrying the Tagaloa title.

“This is the essence of the people of the Pacific is to reunite and strengthen the relationship between Tahiti and Samoa.” Said Tagaloa

Sheraton Samoa Aggie Grey’s Resort hosted everyone to lunch after the title bestowment.

Tagaloa Edouard Fritch lead a delegation of more than 300 officials from Tahiti who were in Samoa for the opening ceremony of the Sheraton Samoa Aggie Grey’s Hotel and Bungalows in Apia on the evening of the same day.